Five Steps to Protect Yourself from OPINION BULLIES 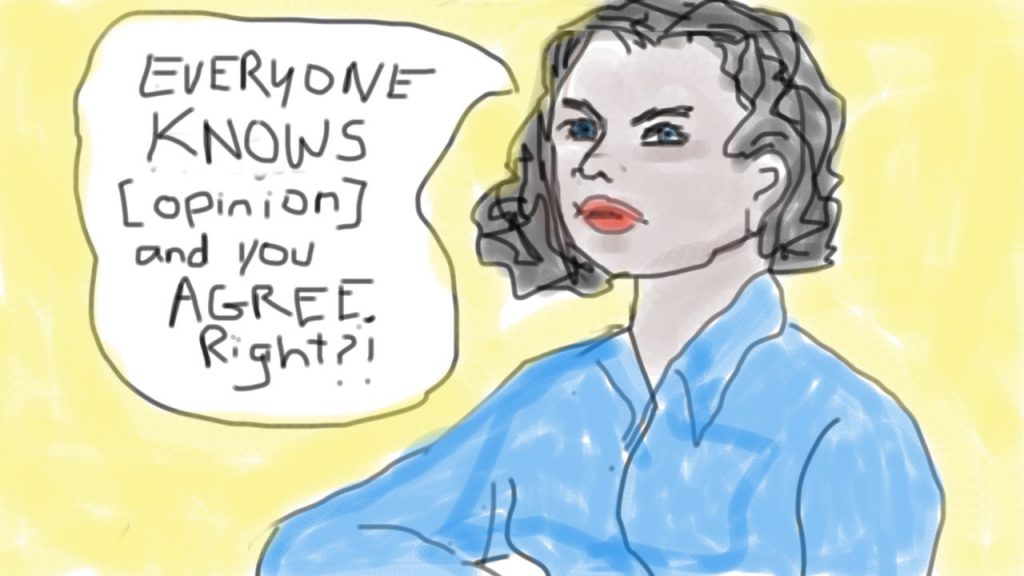 There has never been a time when thinking clearly, and thinking for yourself, have been more important than they are right now.

With Childhood PTSD, it’s all too common that we end up losing ourselves around other people — especially people with strong personalities and strong opinions. It’s OK that people have strong opinions. But with us, We get around that and we often feel we have to go along with those opinions, or we go silent, even when we disagree, or we lose track of what we believe just by being around someone else’s beliefs.

Some areas where this comes up are in families, in dating relationships and marriages, with coworkers, classmates, neighbors and (here’s one my tough groups) parent gatherings for schools or activities around kids. (Ugh! Hate going to those things.)

Everywhere you go, people are going to be different points of view, but more and more, what we’re seeing in the place of friendship and curiosity is a steep rise in the prevalence of what I call “opinion bullies” — people with an extreme belief that their opinion is the Only Right One, and (frankly) a narcissistic sense of entitlement, to not just tell you about it but to demand that you agree.

It’s a nightmare, especially for people who had childhood trauma. It feels threatening, sometimes literally. A lot of people — even people who never had trauma — are confused and hiding out of fear concerning where all this bullying is leading.

For those of us who are affected by trauma, this environment can be paralyzing; it can totally shut us down, and that’s not good.

With this wobbly area around holding our own opinions and our own agenda, we are vulnerable around people who are being intense and authoritative about opinions (even when in most respects they are “nice”).

Without even being aware of it, we can go deep into a CPTSD survival reaction and cling to them, even while we’re cringing. Old thinking can fill our minds: Don’t say a word. Smile. Agree with them. Go along with them.

If intense people engage in bullying behavior against others, we may be tempted to join them in mocking or slandering other people, behind their back and online, sometimes without the least idea whether the attacks we’re repeating are even true.

Using hostility to take someone’s power can bring a quick jolt of confidence and energy but in the long run it feels horrible — as well it should. The best path for those of us working to heal from trauma will always be the path of integrity, connection and boundaries.

You are learning to stop disappearing, to stop abandoning yourself around people who are louder or angrier or more pushy than you.

In fact it can be really dangerous to check out when you’re around this kind of person — this is one of the big ways abuse can happen: We surrender, we give up. We attach ourselves to people and replace our own perceptions with whatever they’re telling us.

Not all bullying is at that level of abuse, but all Bullies are a drag.

For me, it took me years of healing to even see how fragile I was around opinion bullies.

What made me susceptible to them was (among other reasons) needing them, like, for a paycheck. Have you ever had a boss or co-worker like this? Ugh. I’d get around these opinion bullies and it was like taking a bad kind of anesthesia where I couldn’t speak or move. I’d just feel terrible inside, petrified to say anything.

People have to really matter to you to get you to conform to something that repulses you. Either it’s your livelihood, or it’s your only social support, or you’re under threat of some kind. There are plenty of times and places in history where people had to go along with certain opinions or risk being killed. But there’s a subtler form of threat, where it’s implied that you’ll lose your job, or get socially ruined in some way if you speak up.

I don’t like opinion bullies, in case you can’t tell. I used to get paralyzed around them. But now that I am willing to express myself to them, they rarely approach me directly. And to be honest, it’s been pretty rare that anyone tried to suppress me directly. I’ve suffered much more often because I got scared and surrendered my power preemptively, all by myself! There was part of me that was too fragile and scared to stand on my own; I didn’t have confidence in what I thought. I feared I’d be abandoned if I were honest, or if I didn’t tightly control everything I said. II HATE that feeling).

The more I heal from trauma, the less I can tolerate shutting myself down like a self-hating chameleon!

When you let opinion bullies cause you to shut down inside, notice the morally uncomfortable feeling that’s there. It feels gross. It requires that you dumb down. It feels like poison. I remember doing this all the time, and I was asking myself today — when did I stop? Learning to stand up and (when I choose) to speak up was a process, and it’s ongoing. My progress —  in that I no longer lose myself, nor transform into a fake self around opinion bullies — has exactly paralleled my healing from past trauma.

Five Things You Can Do to Be Stronger Around Opinion Bullies:

When you’re doing these five things, the power of bullies gets smaller and smaller. When that happened for me, I realized how much I was controlled — not by bullies, but by my idea of what other people wanted. In effect I was controlled by ME!

Now the problem solver is YOU.. You’re free and you have agency. Developing this doesn’t always happen overnight, but you can make progress a little each day.

You can learn my Daily Practice techniques here.

If you’d like to learn my more advanced techniques, I recommend starting with my online course Healing Childhood PTSD.

Want to access ALL my courses? Become a Member and save! Annual membership also includes access to my private Facebook group, and invitations to my regular group coaching calls for members.

If you love videos, you’ll definitely want to check out my YouTube channel!