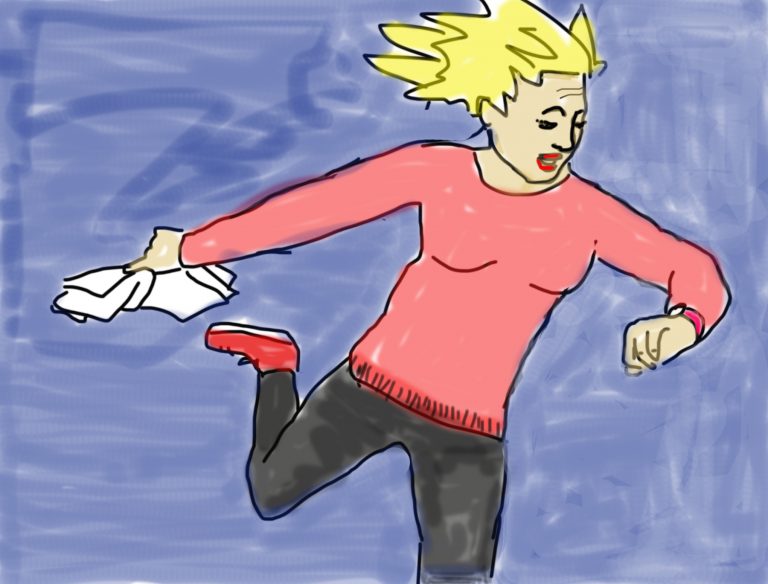 Note: This article is a transcript of a video excerpted from my online course Dysregulation Bootcamp. Brain and emotional dysregulation are common in adults who experienced abuse and neglect in childhoodhood, and is linked to problems with mood, mental focus, health and relationships.

Hurrying is a huge trigger for a lot of people with Childhood PTSD — everything from trying to get out the door in the morning, to rushing through traffic, to just getting overwhelmed with everything you’re trying to get done in a day.

And here’s the thing — most hurrying comes not because of society, not because of technology, but something much more ordinary than that. Are you ready?

Our minds love a sense of spaciousness in time. Taking your time is wonderfully regulating. When is the last time you took a shower and stopped and just enjoyed the feeling of the water? Or brushed your teeth without a feeling of pressure to hurry up? This pushing, pushing all the time can overwhelm us, and “overwhelm”, all by itself, triggers dysregulation.

Our minds love doing things with careful attention.  But the traumatized part of ourselves feels scared of slow, mindful processes because the bad feelings might get a foothold.

There have been times when I stopped to think about why I was hurrying all the time, and the best I could come up with, was that I felt like I was being chased by emotions. I call it “the pack of wolves.” And funnily enough, when I sat in meditation and imagined the wolves came and got me? Nothing terrible happens. Maybe a bit of a cry, and then it passes.

But for a long time I was running from that. So I hurried and hurried. And in my kind of dysregulation hurrying makes me start losing keys and spilling food down my shirt. So then I’m way late getting out the door. In one two-week period where I was intensely dysregulated I drove away from the gas station with the pump still in my car twice, and later rear-ended a truck. Talk about those brain wave lines like a river running over rocks! I’ll start bumping my head on open cabinet doors and shutting my fingers in the fridge. And worst of all, I can’t get anything done when I’m that dysregulated. So the irony is that all that hurrying just ends up making everything take longer.

If you’re from the US, you will remember the kids’ show Mr. Rogers. There’s a beautiful movie that came out about him called Won’t You Be My Neighbor and I highly recommend it. My grandmother who cared for me after preschool every afternoon when I was four years old used to let me watch Mr. Rogers, but no other TV shows because she said most shows were too frenetic and got me wound up.

And she knew that at that time, I was going through trauma at home. I was terrified of silly things like dripping faucets and being in a car driving over a hill — this was in San Francisco and I was always afraid there might be a cliff just over the horizon. But Mr. Rogers started each episode by walking in the door of his “home” — it was a set of course. He’d unbutton his jacket and carefully hang it in the closet, and take out his cardigan and put it on, and then take off his leather shoes. And he’d put on a pair of sneakers, and then carefully lace those, and we’d have this close up view of each shoe while he tied it; it was mesmerizing.

He made that show because he KNEW a lot of kids around him were going through trauma and it was his ministry to hang out with us for half an hour each day and show us ordinary things, done in a slow and ordinary way.

If you’re ready to learn more about Childhood PTSD — the science, the symtpoms and stratagies for healing (including dysregulation) — register for my most popular online course, Healing Childhood PTSD.

If you’d like to join the Dysregulation Bootcamp, click here.  It’s a 20-day program with a video and worksheet delivered to your inbox each day.

Do you think you experience dysregulation? Click here to take my quiz.

2 thoughts on “Dysregulation & CPTSD — Triggered by Hurrying and Overwhelm?”

This site uses Akismet to reduce spam. Learn how your comment data is processed.