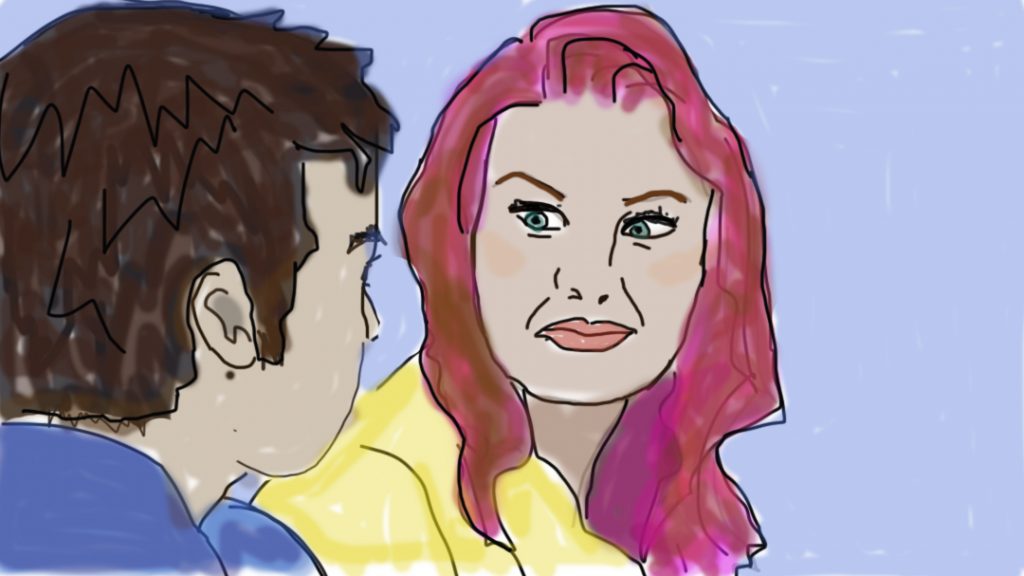 For those of us who grew up with abuse and neglect at home, it can be hard to know how to ACT in social situations. Here’s an example….

Have you ever been to a hotel where there is a person who is there to carry your bags, and even though you didn’t ask, they carry your bags to the room and it’s totally awkward, and you think “I’m supposed to give them a tip, right? I’ve, like seen this on TV. But you don’t have cash, and they’re just standing there,” and you think, “What do I do? What do I say?” And instead of saying anything — you just say “OK bye!” and shut the door. And then feel like a real A-hole.

Or maybe you’re the person who carried the bags, and you you’re not really supposed to ask for the tip, and there’s some right amount of time to stand there… But if you have Childhood PTSD and you’re vulnerable to feeling shame and getting all dysregulated over this, just like the person who is supposed to give the tip, and then you get the door shut in your face. Now We’ve got two people on either side of this door, flooding with shame and not able to say a word!

This kind of awkwardness happens all the time. But for those of us who experienced trauma in childhood, the shame we feel in awkward social situations can make us collapse inside and want to flee AND isolate from all people for all time!

This is my third article and video in the Isolation series, and it’s all about social awkwardness and how to navigate it so we can more gracefully handle awkward situations, and avoid the need to isolate.

OK: Social awkwardness doesn’t always go hand-in-hand with Childhood PTSD and Complex PTSD. But early trauma puts such a huge dent in our confidence. And family homes where there was abuse or neglect or drugs or grinding poverty are NOT usually the greatest places to learn how to handle yourself with other people.

So a lot of us end up having no idea how to act in challenging situations — things like, when you’re in a formal environment, or you’ve been accused of something you didn’t do, or you happen to be in a room with someone famous, or you win a prize, or you lose a prize and you’re expected to congratulate the winner… or when a family member says something really offensive… This stuff can be so fraught for us with Childhood PTSD, and so many of us never got taught how you do this, how to deal with awkward situations gracefully, without shutting down or making a scene.

And so this is one more reason why people with early trauma have such a tendency to isolate — to withdraw from connection and relationships with people even though they long for those things. It’s one of the worst consequences of Childhood PTSD, and if you don’t turn it around, you could end up going deeper into isolation.  Then whatever dodgy personality traits you may already have, isolation will only make them worse. Remember, isolation is not the same as periods of constructive solitude. Solitude can be calming, but ongoing isolation makes us deteriorate. We get weird. It’s really important to break this cycle and learn again how to reconnect.

Now personally, I grew up with educated parents who themselves had been raised by polite and conscientious parents, and I learned to say please and thank you and all that. But because there was alcoholism, there was not a lot of attention given to us kids. We were inconsistently disciplined and rarely called out for rude or selfish behavior. I also was missing a lot of basic skills in social behavior: I was 12 years old when I taught myself to use a knife and fork together.  Until that time, I had a more intuitive way of eating that usually involved scooping op food with a spoon or a fork or my hand, and tipping my head back while I chewed so it didn’t fall out while I ate with my mouth wide open! My siblings all did it. It was all we knew, and no one minded. And it was only when I started to feel shame about my manners when I was at other people’s home that I tried to figure out how to act.

But being neglected can bring out some ugly traits. The seriousness of the drug and alcohol problems in the family kept us all tangled up in chaos, and in that situation a kid kind of HAS to be selfish to get by. If you’re not getting attention and praise sometimes, you might start to show off to others. I know I did. If you don’t get treated fairly, you might become kind of pushy to get what you want, or arrogant, or sharp-tongued, or dismissive of others. And if you’re not cared for when you’re sick or your feelings are hurt, you might start talking about these hardships to anyone who will listen.

So how can we teach ourselves to be more socially graceful? I used to read etiquette books but if they’re written by people from normal families, they kind of skip over these very elementary principles of where OUR learning has to start.

My parents were pretty decent, despite the chaos, but I got very little guidance on how to BE.  So starting in my teens, I sought out and  connected with socially graceful people and — I wasn’t usually courageous enough to ask for help, but I WATCHED them — what to say, when it’s appropriate to speak up, when to pull back. And what I’ve learned has helped me be less isolated, less limited to the company of other screwed up people and more flexible to hang out with virtually any kind of person. That’s what social grace is –it’s having the CHOICE to connect with a wide variety of people wherever you go. And remember, social grace doesn’t mean you tolerate abuse, or stand helplessly in danger.

These guiding principles will help you to create a feeling of ease and welcome with people around you, and to create the opportunity for more connection to blossom:

When you’re in social situations, even as the many colors of your personality come to shine brighter, the art of being gentle, trustworthy and humble will create a positive environment for connection to grow. You’ll find doors opening for you socially, all around you, and into your life will come other socially graceful people, whose company will feel so much kinder and more supportive than anything you had before.

If you’d like to learn more about healing your urge to isolate, you’ll find links to my courses and free resources in the links below.

Healing Childhood PTSD: This online, video-based course is my most popular, and will guide you through the science and symptoms of Childhood PTSD, and teach you strategies to start feeling happier and functioning better.

Not sure if you have Childhood PTSD? Take this Quiz.

If you’re one of my many fans who love learning from videos, be sure to subscribe to my YouTube Channel!