The Never-Ending Wreckage of Growing Up Poor 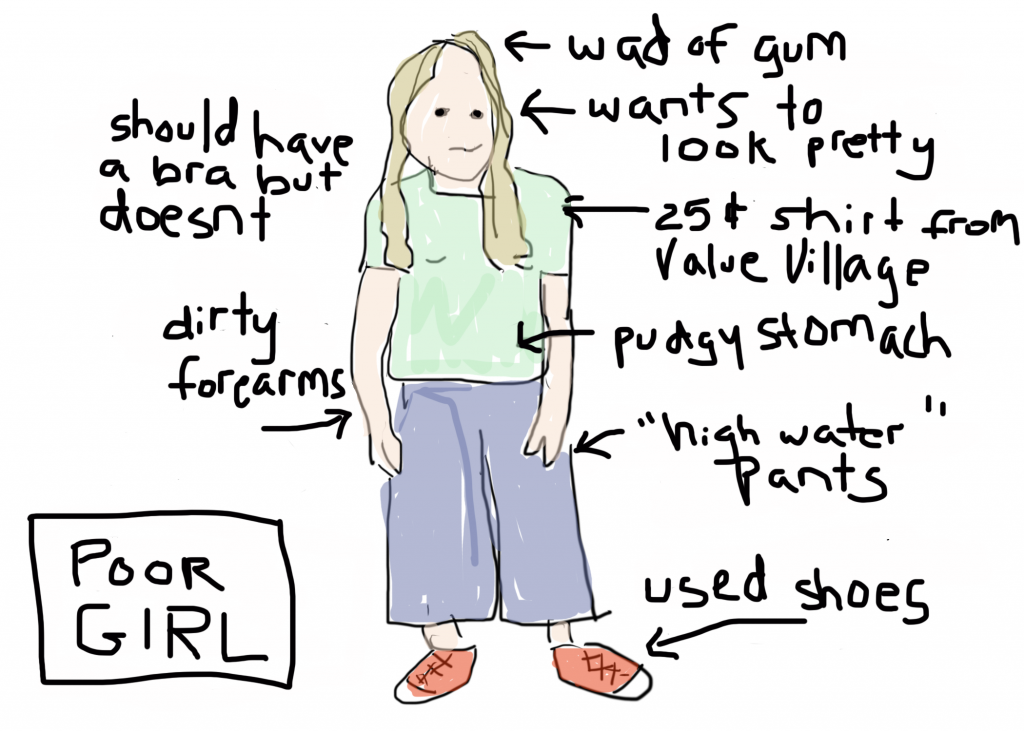 Today you’d probably lump me in with the middle class, but I carry some residue of having grown up poor. I work with people who work hard to help the poor, but have not themselves ever been poor. There are things they don’t understand.

People who grew up with money tend to think that poverty is something they can fix with things like education, “empowerment” or initiatives that almost always have the words “community,” “youth,” “program,” and “center” in them.

The willingness of of these folks to try to help the poor is mostly noble and mostly kind. But as a poor kid I never felt these people and their programs could actually see me. It seemed like they were projecting — imagining what would help them if they were to suddenly find themselves in my shoes. They seemed to me a different kind of people, whose inner selves were clean, unbroken and consistent as butter. Me, I felt more like margarine — a stick of margarine that fell in pine needles — not as good on the inside, dirty on the outside, not the real thing.

The butter people believe poor people are also butter, and they just need the pine needles wiped off. But this never really helps, because of the margarine.

I know that being poor doesn’t literally mean “less than” others. Poverty is a big tent. Some families have very little money but are cohesive, loving and “buttery.” Some families have a lot of money but are chaotic and broken. Some families live in places where external conditions pretty much destroy everything, inside and out. And others live amid ample opportunity, but are beaten down from the inside, from deep or generational poverty and all the crappy behaviors that can rise out of being poor, and that cause one to be poor.

My family lived in two worlds. We succumbed to those poverty behaviors, not because of money but because of alcoholism (which often sets the poverty ball rolling). So even though we lived in a decent neighborhood and my parents were well educated, we were sporadically dependent on food stamps, welfare and free lunch. I hung out with a variety of kids, but identified eventually with the poor kids. I had excellent grades in high school but didn’t go to college right away because I didn’t know how — how to apply, or about the SAT, or the application deadlines. I moved in with a bunch of friends who also didn’t go to college.

People probably did try to encourage me to go far in the world — I can’t remember anymore. This was not the age of helicopter parenting, and my parents had their plates over-full at the time with their own money struggles and the constant upheaval of family alcoholism.  At any rate, when adults tried to talk to me, I pushed them away. It was mortifying especially to have butter people pay attention to me at all, with their assumptions and expectations, blind to how fragile I really was at the time. Even making eye contact with them would make my heart pound and my hands go clumsy, and though I’d want to receive help, everything I said would come out ANGRY.

And this is the electric fence around poverty that makes it so hard to help.

I’ve been on both sides now. Poor people have trouble around money people because money people don’t get it.  Poor people can’t easily explain because when we try, our hearts and mouths fill up with pine needles.

When we’re talking about adverse childhood experiences (ACEs)– the kind that (we now know) strongly affect our ability to function, thrive and survive in the world, it’s hard to tell what’s the chicken and what’s the egg — poverty or behavior. There’s a great article about this here.

Most people I know who have escaped poverty made progress on two fronts — they worked to heal the trauma that happened to them, and they worked on their own behavior. Of course they also had support. Nobody does this alone.

I worked on both fronts, and here are some of the old problems that are pretty much healed:

And here are a few things that still strangle me with vague awfulness:

The researchers look at health outcomes and co-morbidities, but it’s these little things that are the day-to-day harms of a crappy childhood. As I will keep saying like a broken record, there are easy techniques to calm the inner storm and go forward, one foot in front of the other, into a happy, buttery life.